Kohima showcases the celebration of different types of festivals and traditions. The festivals of the Nagas mainly revolve round the fields and agricultural plantations since agriculture is the main source of economy and business for the people here. Some of the important festivals of Kohima are:

Festival of Ao is a festival which is celebrated to denote the culmination of the sowing of seeds. The primary reason for the celebration of this festival is to pray to the gods and please them so that they provide them with the best harvest, the festival continues for three long days in the month of May once the sowing of seeds finish. During the festival the people dance and sing and make merriment all throughout praying for the best harvest in the season. The Aos tribe also celebrates another festival by the name of Tsungrem Mong in the month of August in order to display the zest and vitality among the youths.

The Zemi tribe in Kohima celebrates Sankarni and Sivaratri with joy and merriment. This is a festival of immense happiness and an entire week is spent in enjoying this festival by smoking and drinking the local beer made by the people here.

This is another tribe residing in Kohima and they observe around six different types of festivals every year. They are Kudang lem, Jeinyu Lem,Poang lem which is by the Haongang community and then there are the other festivals which are Naknyu Lem, Moung Lem and Monyu lem. All of these festivals are clearly festivals of joy and merriment. 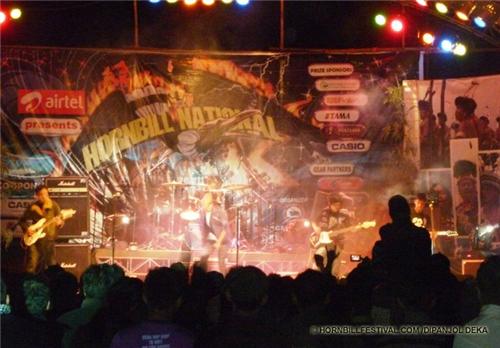 This is a festival that is organized by the Nagaland Tourism and Art culture departments, which continues for around a week in the first part of December. It is an annual event that is celebrated in the place named Kisama which is around 12 kms away from the city of Kohima. This festival is a festival of food and culture and people from places come to witness this grand festival in Nagaland. The name hornbill is derived from the Hornbill bird.

Sekrenyi, is the festival celebrated by the Angami tribe in Kohima by the end of the month of February in order to pray for the welfare and well being of the entire community. Like any other festival of the Nagas, this festival too is a happy festival where the people booze and smoke and eat and make merry. There are however certain rituals that need to be followed in order to make this festival a successful one.


Festival of the Sumi

Ahuna is a festival of the Sumi tribe which is a kind of thanksgiving ceremony. Another festival of total intoxication is Tuluni, where the Nagas consume rice beer, celebrated in the month of July.

Explore more about Culture of Kohima