Khonoma village is the village of A.Z. Phizo who was the father of Naga Nationalist Movement and 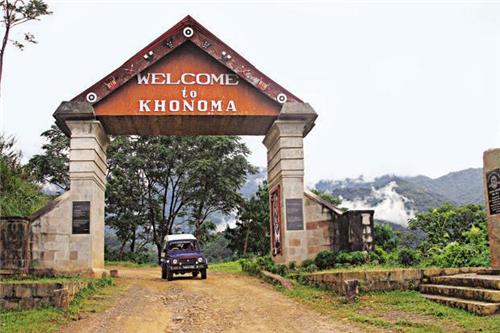 located 20 kms west of Kohima. The village is a famous one for its courage and valor. The Khonoma village has its own share of story in the pages of Naga history.

Khonoma village was the last place where the Naga warriors had the last stand against the British way back in the year 1879. There is a simple white pillar in the village that commemorates sub major Nurbir Sai and G.H. Damant, Lieutenant H. H. Forbes and Major C.R. Rock who were the warriors who died fighting in Khonoma.

The Khonoma gate itself is a story teller when it clearly shows that the British had infiltrated the Naga Hills years back. The village is considered to be around 700 years old and was initially referred to as ‘Khwunoria’ by the residents of the village. The village is surrounded by some gigantic hills as high as 9000 feet. The hills that surround the village run along a ridge which is one of the characteristic of the Angami Village and its domain extends from the rice fields to the uplands of the Barail range.

Flora and Fauna in Khonoma Village

A very outstanding feature of Khonoma village is the presence of the Kuda fort which literally means a ‘place of defense’. There are three khels (localities) in total and each of the khels has one fort each. It is believed that in the ancient times the strength of any khel is measured by the number of young warriors and the condition of the khuda. Each khel is responsible for the proper maintenance of its fort, and that is followed even today. The region is a hilly area with slopes and steep crags and the hills are covered with amazing lush green forests. The village attains the name after a local plant known as ‘Khuno’ which grows here. Alder trees are a specialty in the area and it grows here in jhum cultivation process. The alder trees are known to prevent soil erosion by the process of nitrogen fixation.

In the year 1998, the Khonoma Nature Conservation and Tragapon Sanctuary (KNCTS) was set up. This sanctuary was mainly set up in order to conserve the Blythe’s Tragopan, an endangered pheasant of the wildlife of the state. The Tragopan Sanctuary covers an area of about 70 sq kms. and is a private property of the people of the Khonoma village. The sanctuary is the home to a lot of endangered species of plants and animals.

Khonoma Village as a Tourist spot 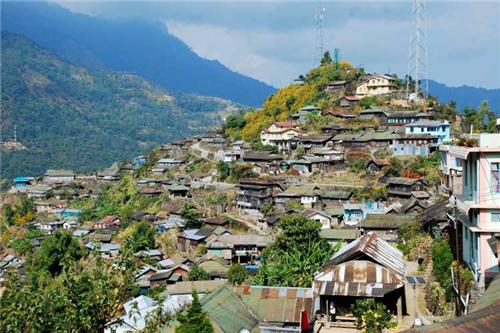 The sanctuary is gradually gaining a lot of popularity as an ideal place for adventure and nature study, tourists from places far and wide come over to the sanctuary to explore the territory and witness the wonderful sight of the endangered animals and plants. It has also become a model village for eco-tourism with its mission of ‘Green Khonoma’.

This part of Nagaland is primarily occupied by the Angami tribe, one of the sixteen tribes of the Nagas. The people here do not cut trees for they intend to preserve trees and make their village the greenest village. It is mandatory for every household to have a dustbin in their homes and hence maintain proper sanitation. Whatever ashes and residue are produce are treated as proper manure for the plants. Every month, a sanitation drive is carried out by the community and the entire garbage of the place is burnt which is indeed a brilliant way to maintain hygiene and sanitation.

Khonoma village is an excellent place for eco-tourism that holds camps, treks and other outdoor activities from time to time. Visiting the place is an experience worth remembering and it counts as one of those tribal travel journeys.