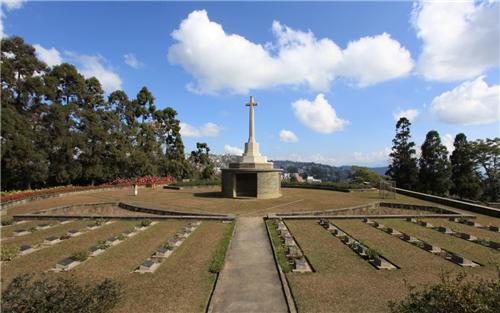 town. Formerly known as the Garrison Hill, the Kohima World War Cemetery II is a memorial that stands in Kohima in honor of those who were killed during the World War II. Located amidst wonderful scenery, the cemetery is wonderfully designed with magnificent stone steps, that bears testimony to one of the bloodiest fight in the history of Wars.

Structure of the Cemetery of World War II


The cemetery has a total of 18 plots and in each of these 18 plots are erected 1421 slabs in the loving memory of those soldiers and warriors killed in the battle of Kohima. Each of the graves are supported by a bronze plaque which is again supported by an epitaph. The cemetery is properly maintained and the responsibility is of Commonwealth War Graves Commission. It has been found that the graves belong to soldiers from different places. Out of them 1070 were from United Kingdom, 5 were from Canada, 9 from Burma, 1 from West Africa, 2 from East Africa, 3 from Australia, 33 from undivided India and 1 from non-war grave.

The Kohima Cremation Memorial that commemorates 917 Hindu and Sikh Soldiers who were cremated here, stands at the highest point of the cemetery. The memorial to the 2nd Division on the other hand lies at the lower end of the cemetery which bears the inscription as follows:
"When you go home Tell them of us and say, For your tomorrow, We gave our today."

The cemetery also has a memorial to the 2nd Battalion, the Dorsetshire Regiment and many other regimental memorials  erected near garrison Hill.

The Battle of Kohima has been considered as one of the fieriest battles of World War II. The battle lasted for as long as three long months and it consisted of hand to hand combat with people suffering yet fighting. The loss suffered during and after the battle was huge. 85,000 Japanese had invaded India and out of them only around 20,000 were left standing. 17,857 Indian and British troops were killed, injured and wounded and even missing. The British, before leaving Kohima erected a moving memorial of the comrades which stands there till date.

World War II got over long back, however, the scars and the pain still remains. The World War cemetery is a place of pilgrimage and reconciliation and hence prayers are witnessed in the center of the pilgrimage to remember the fallen comrades.

The important fact that the visitors to the cemetery must be aware of is that an area on the western side of the cemetery which is behind the cremation memorial is cordoned off. This is to prevent any accidents that might occur in the service area where land slides occur. Land movement is totally not anything unusual in a hilly place like Kohima. However, the Indian government is taking necessary steps in order to stabilize the area and prevent further land slippages.

The cemetery gates remain open on all days for public except on Sundays.

”HERE, AROUND THE TENNIS COURT OF THE DEPUTY COMMISSIONER LIE MEN WHO FOUGHT IN THE BATTLE OF KOHIMA IN WHICH THEY AND THEIR COMRADES FINALLY HALTED THE INVASION OF INDIA BY THE FORCES OF JAPAN IN APRIL 1944.”